The spider(s) that ate Texas

This awesome photo is the subject of much discussion among entomologists lately. (larger photo here) 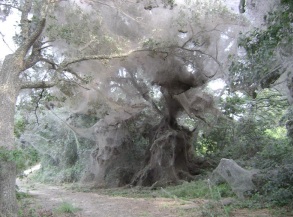 Is it from a massive dispersal of spiderlings?
Or is it part of a communal web?

Many people don’t realize that a few (fairly uncommon) spiders actually live together in a group. It’s not like ants and bees–all the spiders in a shared web reproduce.

Social spiders all cooperate to build and maintain the web, capture prey, and take care of babies.

To learn more about social spiders:

EDITED TO ADD: verdict is in EDITED AGAIN 8/31/07: Verdict is out again. Now they think it’s a mass hatching event of Tetragnathidae (Long Jawed Orb Weavers)

EDITED TO ADD: How could I have missed this one!? Kingdom of the Spiders, starring William Shatner. (Thanks to a commenter at Zooillogix for pointing that out.)

EDITED EVEN YET AGAIN TO ADD: In response to a question about whether social spiders eat and re-spin their webs nightly as some large garden spiders do, I found out: “Anelosimus studiosus adds to its webs over the season but does not eat it, at least detectably. And so much debris accumulates in the webs over time that consumption and re-spinning would be detectable! ” (8/30/07)

EDITED EVEN ONE MORE TIME TO ADD: Looks like the experts are still arguing back and forth about the source of the web. They do agree it was produced by spiders, and more specimens are being collected. (8/31/07)
EDITED THE LAST TIME TO SAY: final update here.