The interwebs are all abuzz (ha!) with a new report that cellphones might be responsible for the losses in honeybee populations.

It’s a peer reviewed paper…but frankly, I think the journal editor has a lot of questions to answer about letting this paper be published.

There are many things wrong with this paper that make me discount all of its findings. A short list:

1. They tested only FOUR hives–and each hive had a different treatment. This means that there was NO replication for their treatments!!
Basically, they put cell phones in two hives, cellphones with no batteries in another hive, and left another hive alone.  Because multiple hives were not tested, this calls all the measurements reported into question. For example, one of the things measured was the egg laying rate of the queen bee in each hive. Because there is only one queen per hive….and one hive per treatment….if one of the queens happened to be substandard, or just have a bad day, that would skew the results.  And there is no way to say what really caused the differences without a SAMPLE of many hives, each with the same treatments, or lack of treatment. 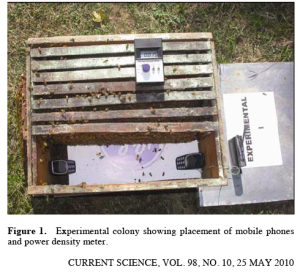 2. Because the sample size was so small, the claim of “significant” statistical results is invalid. Essentially, they had a sample size of one. You can’t do statistics on that. No statistical values were presented in the paper, although the word “significant” was used and the phrase “(p<0.05)” was in the abstract.  This is an inappropriate use of these numbers.

3. They used an EMF monitor in a way that (as best as I can tell) it was not meant to be used (see photo). EMF monitors are finicky things, and are supposed to be used in carefully calibrated conditions. Walking around with it and plopping it on a beehive are NOT part of standard procedure.

Additionally, there was no shielding on the other two hives that were NOT treated with cellphones–so they really received a background dose of whatever the cellphones in the region were producing, not a true control.

4. They put the cell phones in the freakin’ hive (see photo). Now, granted, maybe that is where Eddie Izzard takes his phone calls. But most people do not stand inside–or next to–active beehives when they are chatting about what to get for dinner.  This design is rather analogous to strapping cellphones to your scrotum. I’m betting you’ll get an effect–but is it a real one that the average scrotum owner needs to worry about?

5. The references cited include newspaper articles and advocacy websites, which are not authoritative sources for a scientific paper. An article on X-rays, (which are not the same as cell phone emissions!), was cited as a reference showing cell phones could cause elevated drone production.  Additionally, that paper was published in 1986, much earlier than cellphones were in common production or use.

This paper (which for a student research paper would be questionable) should not have been in a journal.
It definitely should not have postulated a connection to Colony Collapse Disorder.
And it should never have made the levels of press exposure that it did. Shame on all of you newsies.

This is a classic example of Bad Science Reporting.  OMG RADIATION IN MAI BEEZ!!!

The idea that cellphones affect bees has been around since 2007–and it wasn’t legit that time, either. You might also find this discussion of electromagnetic fields at the Skeptic’s Dictionary helpful.

BTW, this paper would be a great exercise for a classroom–take one of the press reports I cited above, and have your students evaluate this paper. Can they spot the ways in which it’s not quite proper science?