One of the really cool things about Entomology is there are a lot of opportunities for longitudinal studies. For hundreds of years, bug nerds have been routinely killing and preserving the subjects of their studies, so we have a nice historical record to make comparisons with.

A new paper in PLOS came out recently that did a nice job of reproducing the sampling methods of a bee study from 80 years ago–and the results are a bit depressing.

I’ve covered before the importance of native pollinators, and bumble bees provide important pollination services to crop plants–in this study, red clover. Red Clover is a great pick for a pollination study, since it is self-incompatible–in other words, it can’t fertilize itself, and is dependent on pollinators to move pollen around for any reproduction.

The investigators were interested in seeing how bumble species might have changed over time because of changes in climate, tilling practices, and overall landscape changes.   They managed to find plots to survey that were remarkably like the initial 1930’s study, and started catching bumblebees. 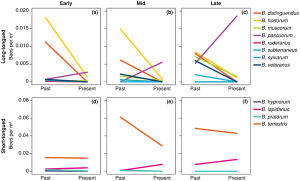 The 1930 study identified 12 species of bees as common in fields of clover; 5 of them were not detected at all in this modern survey.  The bumblebee species that vanished were also what is called “long-tongued” species.   Bumble bees occupy a special pollination space, since as bigger animals, they have longer tongues.  This lets them work flowers that smaller honeybees can’t reach into.

Bumble bees also are able to forage at low temperatures, and can buzz pollinate.  (Some plants only release their pollen when they are vibrated at specific frequencies.)

Bumbles are critical to what are called “ecosystem services,”–the stuff we get for free just for living on Earth.  Like pollination of our food crops by wild pollinators, which in the US is valued around 6 billion dollars.

When you look at the graphs, it’s pretty clear–the number of species and the frequency (commonness) of species declined. As best I can tell from the paper, it seems to me that the modern researchers actually sampled more intensively than in the past.  Here’s what the authors have to say:

“For long-tongued species, abundances of queens was found to decline an order of magnitude from the 1930’s to the present, corresponding to a dramatic decline in effective population sizes. Findings of the present study are strong and direct evidence of local changes in species richness and abundances.”

Yikes.  But, you may be thinking, so what? Some bumblebees went away.

I can’t tell you what the consequences of this change will be, but I can tell you I am fairly sure it won’t be a good thing. I think Aldo Leopold said it best:

Only those who know the most about it can appreciate how little we know about it. The last word in ignorance is the man who says of an animal or plant: “What good is it?”  If the land mechanism as a whole is good, then every part is good, whether we understand it or not. If the biota, in the course of aeons, has built something we like but do not understand, then who but a fool would discard seemingly useless parts? To keep every cog and wheel is the first precaution of intelligent tinkering.