The GOP War on Caterpillars

Priebus rejected the idea that Republicans are waging a war on women.

“If the Democrats said we had a war on caterpillars and every mainstream media outlet talked about the fact that Republicans have a war on caterpillars, then we’d have problems with caterpillars,” Republican National Committee Chairman Reince Priebus said in an interview on Bloomberg Television’s “Political Capital with Al Hunt” airing this weekend. “It’s a fiction.”

How the HELL do you explain that thought path??
Women –> Sluts –> Uterus control –> CATERPILLARS.

Also? Denying there is a war on women only works if, in fact, there isn’t a war on women.  Hundreds of bills are being introduced all over the US that limit women’s rights.  Just last week Wisconsin quietly revoked an equal pay bill.

The analogy with insects doesn’t work either if, in fact, there actually is a GOP war on caterpillars.  Let’s continue to use Wisconsin as an example. Wisconsin sponsors a major project to kill the Gypsy Moth. Go look. It’s WAR, people. There are areas clearly marked for “suppression.”

Texas recently cut health services to many women. They also are persecuting cactus moth caterpillars. In fact, there is a tri-state consortium devoted to killing these caterpillars; here’s some representative language:   “In the wake of the Cactoblastis, only death and destruction are found, presenting a threat to human welfare…”   Sounds pretty warlike to me!

Michigan, a state that recently banned same-sex partner benefits, has quarantines in many areas, and routinely stops people with firewood for warrantless searches. What are they looking for? GRUBS. The Emerald Ash Borer is marked for elimination.  You are even encouraged to turn in suspicious characters by calling a hotline.

The GOP-controlled House introduced a “Reducing Regulatory Burdens Act” in 2011 that would reduce pesticide regulation, including removing some pieces of the Clean Water Act that currently restrict pesticides in watersheds.

There is evidence of flip-flopping by Mitt Romney on the caterpillar issue. He labeled a project to control the invasive species of winter moths as “porkbarrel spending” in 2006, and didn’t fund it.  His current position on funding the War on Caterpillars is unclear.

Clearly, the War on Caterpillars is REAL.  Of course, there is a reason why caterpillars are targeted by both the GOP and farmers.* It’s simple math that goes all the way back to Malthus.  Populations have the potential to grow faster than their food supply. So, if you want to control an insect pest, you attack its reproductive cycle.

But why in the world would you want to prevent women from having access to birth control, or the ability to control their own bodies? This seems counter-productive for a bunch of fiscal conservatives.  How will we provide water and food for a expanding population? How will those babies be employed in the future when they grow up? How will all those kids be educated? We are building more prisons than schools, which doesn’t bode well for anyone’s future prospects.

Obviously, I think women should have control over their bodies because it’s a basic human right (recognized since 1968 by the UN, in fact).  It just seems like the current focus on womb control is very short-sighted from a fiscal/living-in-the-real-world point of view, as well. 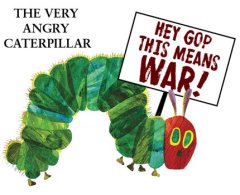 Legislation was introduced to require women to provide a written explanation about why they wanted birth control to their employers. Legislation has been introduced to define you as pregnant 2 weeks before conception. Women who have miscarriages are charged with murder.   This is some serious heinous fuckery, people.  It’s 2012. The state should not be getting all up in my lady business.

There is an upside to all this. The best thing to come out of the GOP war on caterpillars was the explosion of #GOPWarOnCaterpillars on Twitter.  This charge was led by the wonderful John Scalzi, who decided see if he could get the tag to become a “trending topic”.  Here are some of my favorites–feel free to suggest more slogans in the comments!

*Actually, these are all invasive species and it’s ok with me if they kill them. But that kind of detracts from my point, so it’s a parenthetical down here.

To save money I no longer block ads on this site or have a custom design.
Loading Comments...
Comment
×