The horrible truth about Spiderman’s Anatomy

I was on a panel a few weeks ago discussing mutations, and what they can and cannot do.  Spider-man was one of the topics, because the sad truth is that the Comics industry has conspired in a G-rated cover-up to hide his terrible, terrible affliction.

Spider-man’s spider webbing talent isn’t what you think it is.  Sure, male spiders do have special appendages on the front of their bodies–they are really noticeable “boxing gloves.”  They actually can be up to 20% of a male spider’s body weight.

Those are not, however, what spiders shoot silk or webbing out of.  These pedipalps have one function. SEX.

That white, sticky stuff Peter Parker is shooting out of his wrist? Um. Yeah.

There is a reason that people freak out when he shoots a big blop of splooge at them.

See, spiders have a very odd reproductive system. Male spiders don’t have a penis.  (I don’t know if a side effect of Mr. Parker’s radioactive spider bite was his penis falling off, but that might explain his perpetual whiny attitude.  Even if if he did manage to initially retain his penis, it probably broke off later during mating with Mary Jane.) 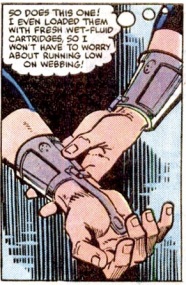 Pedipalps are modified appendages at the front of a male spider.  They use these to insert sperm into a female’s body.   To get the sperm out of his gonads in the rear, a male spider creates something called a “sperm web” that he limbos underneath and deposits sperm onto.

He then turns around and “loads” the sperm into his pedipalps, and sets off to find a female and hook up.  Pedipalps are the spider equivalent of a turkey baster.

Don’t see the parallel? Let’s review how Mr. Parker’s “slingers” work.  His arms are modified appendages at the front of his body. He has to “load them” with “fresh wet-fluid.”

NOW YOU KNOW THE TRUTH.

“But, Bug Girl!” You say. “You don’t understand the story!” Ok, let’s suppose, for your collective mental sanity, that Mr. Parker is actually shooting spider silk, not nocturnal emissions, at villains.

Is that….an improvement?  I can certainly see why Spider-man would prefer to gather up the silk and dispense it from a gizmo on his arm, rather than have a little flap in the back of his leotard.

If you would like to look at male spider pedipalps in action, check out this video.  The naughty part begins at 2:35 — note that it really is very much like a turkey baster in function!

Scientifically Accurate Spider-Man (is not accurate)